As an Amazon Associate I earn from qualifying purchases.

While the first batch of the mastic pudding I made a couple of days ago was baking in the oven, the second one was churning in the ice cream machine.

Even though mastic is so sticky, the ice cream is not as resinous as I thought it would be, it doesn’t hold on to the spoon like glue (I was hoping it would.) It has the texture of regular ice cream but with a very distinguishable flavor.

To make this ice cream, simply prepare mastic pudding and churn it in the ice cream machine instead of baking it. Transfer it to a lidded container and freeze it until set.

Tarragon Ice Cream
What does a wise girl do when she has leftover tarragon? She makes ice cream,
Tchoutchouka: Moroccan Roasted Pepper and Tomato Salad
With a husband who doesn’t eat green peppers and a daughter who doesn’t eat anything 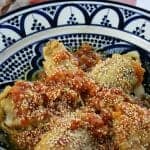 Chicken with Tomatoes, Honey and Sesame Seeds
Mellahs are Jewish quarters located in the old, walled part of most major Moroccan cities.